Second solo trip to the backcountry!   What did you think I meant? 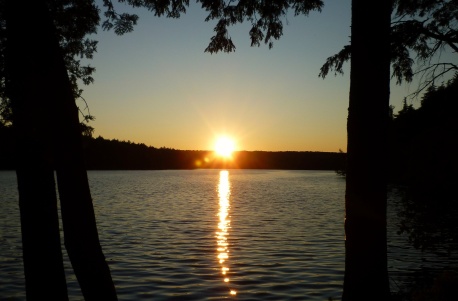 This one was fantastic. Not that the last time wasn’t, but it was definitely much better. The weather was perfect, especially on the days I was paddling the kayak. Even the thunderstorm waited patiently for me to set up the tent and the tarp for shelter.

We’d booked a lake in Algonquin, and because it was a long weekend, there wasn’t much available. I got my second choice at least. I wanted something easy for my little one. No portaging at all. Just to see if it was any easier on him. (Safe to say he really enjoyed it this time)

At the put in, you could pull your car all the way up to the lake. It was crazy how easy it all was. My only worry was that a storm was coming. We kept near the shore and stopped at the first site we saw. It was pretty horrible. I was hoping they all weren’t all this bad. So we kept going. Paddled about 3km in and there I saw a really nice looking site. Open but shaded, pretty, lots of room etc… so this was home for the next few days.

It was a pretty gloomy day and I could hear thunder off in the distance as I was setting up the tent.

Just as I was done, the rain started coming down.

It didn’t last terribly long. The little guy certainly didn’t seem to mind. He could barely wait for me to set up the tent so he could have his first nap.

I had to laugh when I saw this… the privy sign had the little man symbol almost worn off.  So this was officially the ladies room.  Boys will have to go somewhere else!

I really like it when you get that feeling that you are in the right spot.  Do you ever get that?  There were a lot of purple flowers on the site.  If it’s not obvious, purple is my favorite color, and I love purple flowers.  It was a really nice little welcome, and made me smile 😊

You would think that staying in one spot instead of moving from lake to lake would be boring, but I managed to keep myself busy.  Mostly with hiking, gathering wood, chopping wood, burning wood, cooking, cleaning up etc.

There was a nice little sunny spot on the site where I was able to go for a little swim.  It’s kind of amazing what the lake water does to your hair.  I really don’t think that we were created to use soaps and shampoos, but the water in the city seems to make it as if you have to.  Someone should just bottle lake water for all us city dwellers to bathe in, then all hair products will go out of business.

There was no sign of any wildlife, not even chipmunks!  Although we did see (and hear) a few loons.  As well as some other incomprehensible things during the night.  One night I was half asleep and woke to what sounded like a fish jumping out and into the water.  Not 20 seconds later it sounded as if an alligator did a body slam into the water.  Knowing that we don’t have alligators here, in my sleepy state I reasoned that it must be a bear.  Yeap, definitely a bear.  I looked out my tent window and the water was still.  So I did what any other confused-half-asleep-terrified-solo-female would do, and said screw it, I’m tired, and fell back to sleep.  (I imagine we were hoping for something more interesting?)

Really though, I was sure it wasn’t a bear.  There were absolutely no trails at all on this site.  It was all dense forest, nothing flat, lots of holes, rocks and green.  It looked as if humans had barely ventured out beyond the main area of the campsite, never mind the animals.  It was also nice not to find any bear or moose poop.  Although I still felt freaked out walking by myself each night to hide to food.  I mostly just sang to make noise hoping that I wasn’t about to walk into another campsite and embarrass myself.

I was a little ticked that I had walked so far only to discover near the end of the weekend that people had dumped food maybe 20feet from where we slept!  Would it kill ya to clean up after yourselves?  Why am I walking so far when food was there the whole time?!  I had looked around when I set up, but it was in a spot tucked back in under downed trees that I had to climb over.  I really wouldn’t think people would toss things back there, but now I know better.

Still, the untouched woods are so interesting, and definitely gave up a lot of dead wood to keep us warm.  I took Goliath out there once in his carrier, but wound up wiping out pretty good and bashing my knee since I was too focused on him.  The other times I just went while he was napping.  It was a frequent thing; like camping with a 90 year old man!  (Not complaining, just the way it is; and I wouldn’t change a thing).

A little farther back in and it was much more dense and bushwacky.  I wound up taking a branch to the face while I was bending down to look at something interesting.  It was a good thing I was wearing my glasses at the time!  Pretty much a blessing that something had bit my eye the night before and I had resembled Sloth from the Goonies. Otherwise I’d’ve been wearing my contacts and gotten poked in the eyeball.  Instead I just got a big scrape down my face… I tell ya, I was looking like hot stuff.   Maybe I’ll even post my Sloth pic.  It certainly made me laugh! 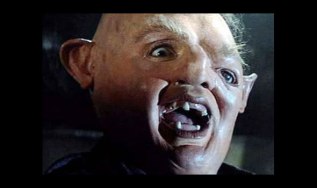 <—-Me after a hike in the woods, wanna snuggle in the tent?  I might let you if ya got some Baby Ruth?!

We had a really great time this time, and Goliath is getting more confident in the kayak.  (Almost too confident!)  But he enjoyed himself and had an adventure, so that’s what matters!

Bonus points if you can see what I almost lost here.  It’s just another darn excuse to spend some more money, because you know I just NEED something else for camping.  When does that end?? 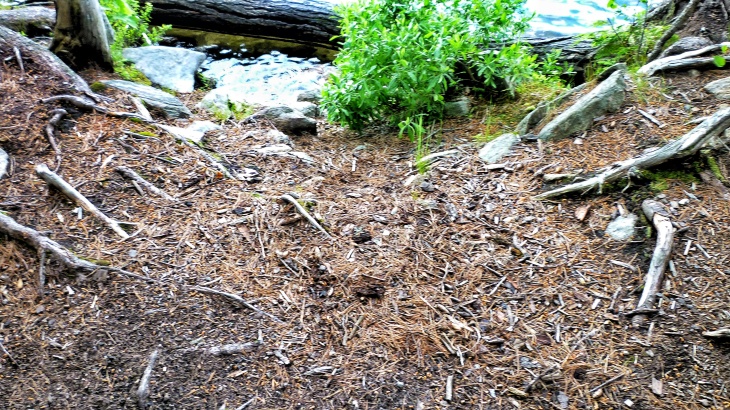 I can’t wait to do some more exploring, and have bigger trips to plan.  And you have a movie to go watch, so get to it!

2 thoughts on “Number 2 in the woods”