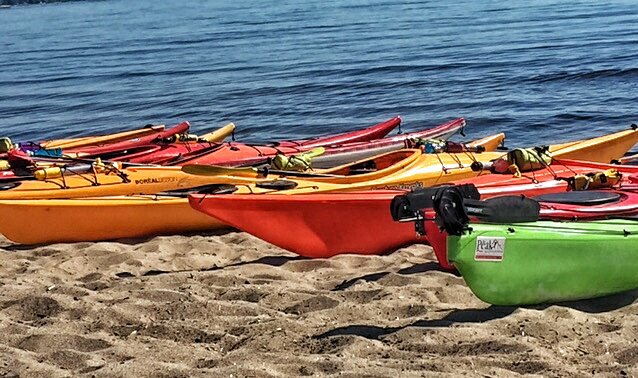 One thing that really helps to get my butt out of bed in the morning, is when I’ve already paid for it.  Recently I bought a kayak and found that it wasn’t all that easy to learn simply from watching YouTube videos. Who knew? And since I’m used to paddling a canoe, let’s just say my technique needed a little refining.  Camper Christina recommended the Ontario Sea Kayak Centre to me.  I had heard of them, but didn’t realize they offered lessons so close to home.

I can’t stress enough what a good investment it is to get lessons. Actually, getting lessons before you buy something is even smarter.  I did that before buying a motorcycle, just in case I wound up hating it. I loved that too, but I did wind up changing my mind about which bike I would start out on. When I bought my kayak, it was more of an impulse because it was on sale.  I had a lot of time booked off and places to go and figured this kayak would be the best way to get me there.  Not so much as it turns out.

I had an idea of some of the skills already, but I was using them sort of backwards. And if you paddle a kayak like a canoe, you’re going to get wet. The instructors showed us all how to paddle much more efficiently. I was feeling pretty darn good buy the end of the two days.  Not that I’m going to go off kayaking into the sea (my kayak isn’t built for that – don’t worry mum) (haha! As if she even reads this), but I feel like I can paddle better now and that’s what matters.

We also went through a lot of safety stuff. Wet exits, assisted rescues, self-rescues… Which left me thinking that the trips I’ve already taken may really have been too much. I could have gotten into some trouble had I tipped my loaded kayak out there.

I have to debate now whether or not I should get a new kayak or fiddle with what I’ve got to make it safer.  Either way, I’ve got to change up what I’m doing.

Maybe I just need a less expensive hobby.  Seeing how I tend to be very accident prone, a friend of mine suggested painting by numbers.  That just doesn’t seem as appealing.

Thanks for the great recommendation Christina! And thanks so much to the Ontario Sea Kayak Centre for a great weekend!