This last trip was a trip I had planned for some time now.  It wasn’t all easy, but we’ll get to the reason for the title later.

Ever since I took the Trip Leadership class through ORCKA, I’ve wanted to visit Canoe Lake in Algonquin. I did a small project on Tom Thompson and have to admit that I’m more than a little fascinated with him.  Not so much his work, but his death and the speculation that he may still be making appearances on Canoe lake where he drowned.

The very first thing on my mind once we put in on Canoe lake was finding the Cairn in his memory.  Well second thing… only once we found our friends who had turned the wrong way and wound up on a private camp only to get kicked out. I suppose it wouldn’t be unheard of to see a canoe one minute and not the next. Our friends disappeared from sight when they turned a corner and found that camp. My friend in the canoe with me joked, saying, “Well this is Canoe lake after all. Maybe the ghost of Tom Thompson got them?” I imagine it’s not a good thing to lose two whole people the very first time you bring friends into the woods.

It was pouring rain but I knew I wouldn’t be as interested in finding it on the way out.  I figured it would be more eventful or noticeable but the dock gave no clue that there was a Cairn somewhere up there. Good thing I had the coordinates from the Geocaching website. They proved to come in very handy. 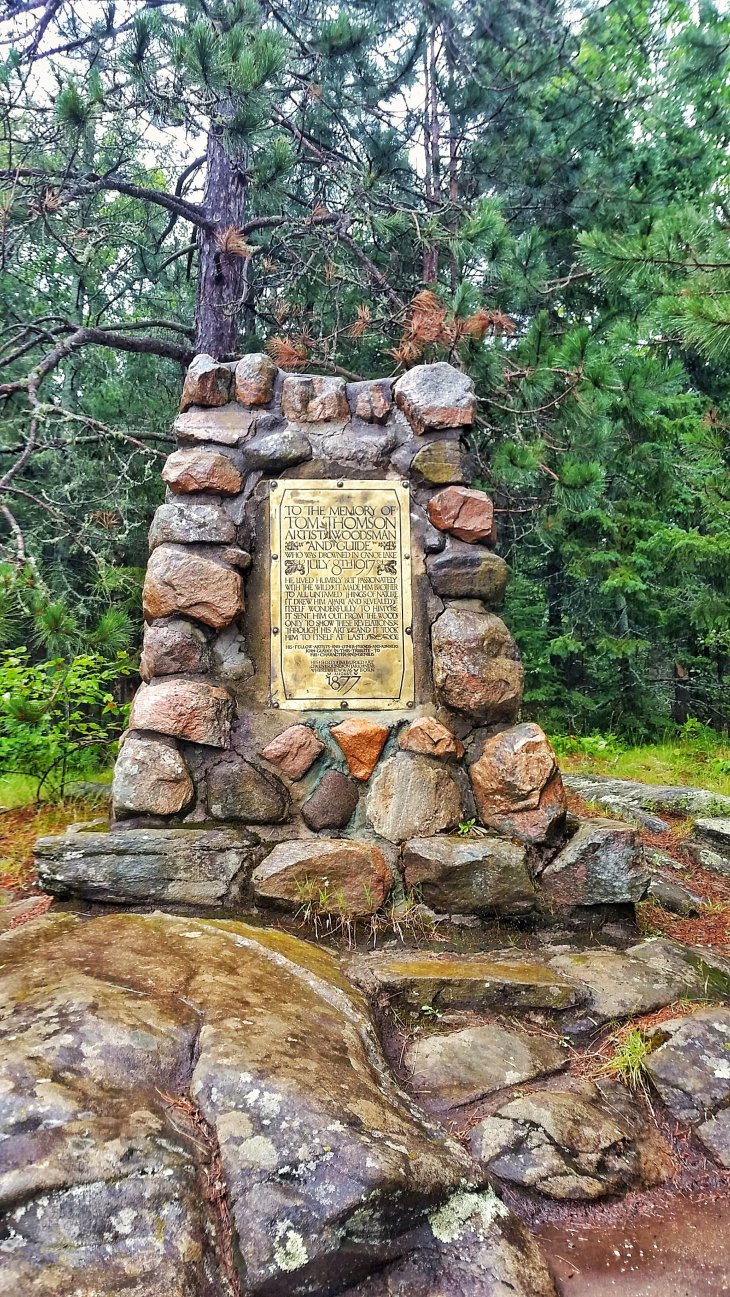 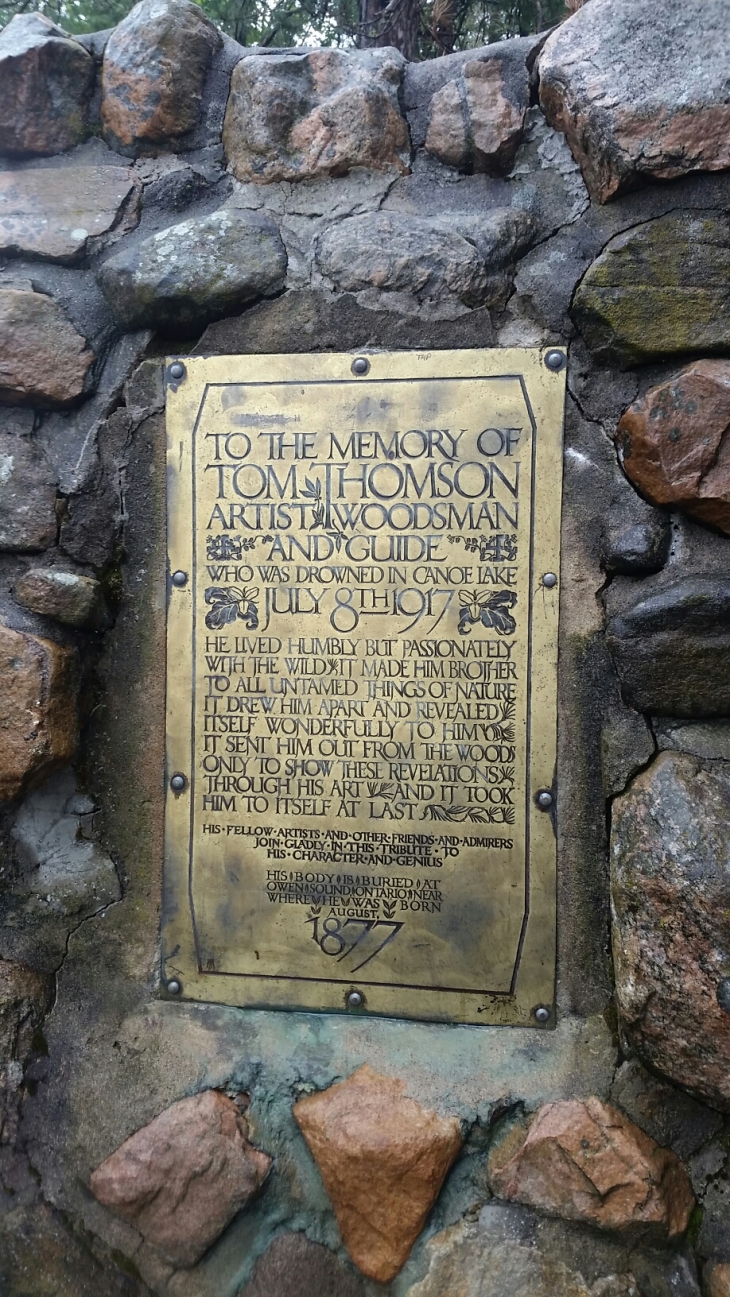 So there it was… I guess with how famous he was I just expected more. But it was great to have found it. Someday I’ll have to go back for a decent dry shot.

There were 4 of us on this trip and we wound up making a few friends along the way which was nice because the second night we were invited to share a really cool island on Burnt lake. It was lovely. Lots of space for tents.  I had my own little spot down by the water where I could fall asleep near a tiny waterfall. Heavenly.  (I was also just close enough to the other tents to hear some snoring off in the distance, which normally would keep me wide awake but this time it was quite comforting. Maybe because I thought I had seen bear poop near my tent, but it turned out on further inspection the next day to be human. Hell yes I looked!  I’m scared of bears) Either way, it was nice to hear that friends were around.

So the title… well one person that we’d met was Eric.  A 17 year old from Austria who was soloing.  Actually, as I’m writing up this draft, he’s still there.  We were all so incredibly impressed with this young man. Very smart and mature for his age. And to get yourself out that far in another country alone? I couldn’t have done that at 17! 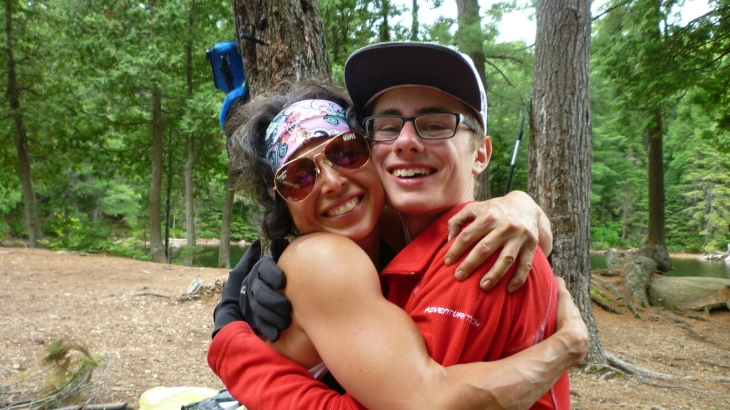 Anyhow, Eric, although he spoke wonderful English, there were a few slang words or inferences at times that he had to seek clarification on. When I told the group about taking a pic of portaging a canoe barefoot in a bikini, we started chatting about how funny that’d look on the blog and what I should call it. He suggested ‘Easy in Algonquin’, meaning that portaging was so easy that you can do it barefoot.  Of course my (much more mature… older) brain went to the bikini and I burst out laughing at the other possible meaning. Eric was thoroughly puzzled until Veronica hollered out, “Ya just called her a floozy!” The mortified look on his innocent face was priceless. Easy in Algonquin it is. But having said that, portaging is easy enough to do barefoot.

Everything really worked out on this trip. We even had a sweet visit from a dog while we were on the island. I thought that was so nice, especially since I missed my little one so much. As we were packing up a sweet little dog came running up and placed himself in front of us for some belly rubs. He was adorable and I was happy to oblige. (Although I wonder why this approach never works for me?) Turns out a man and his son had stopped for lunch on the other side of the island. I guess once the dog heard us, he had to investigate.

I was absolutely spoiled carrying an ultra-light canoe over the portages this time. But I was so impressed with one of my friends, the tiniest one of the group, carrying this huge aluminum canoe that must have weighed 100 pounds all by herself! At the end of each portage it didn’t matter how far away I was, I could always hear a big crash and I knew that she had reached the end and was flinging the heavy canoe off of her shoulders. 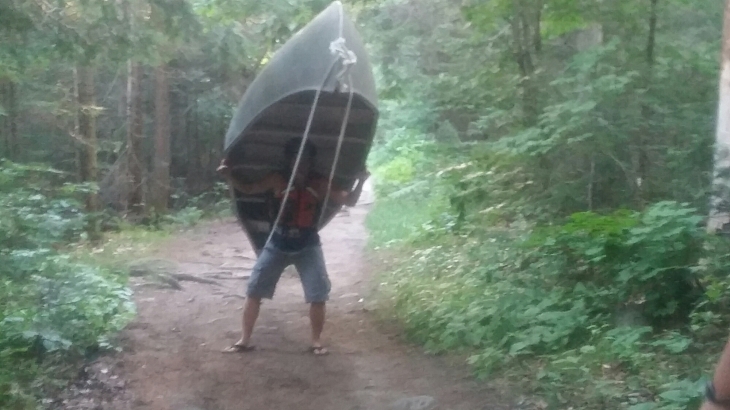 The week, was a great time with great friends, new and old, and I would do it all again in a heartbeat.  I think that we’re all counting the days until we can.

8 thoughts on “Easy in Algonquin”